MUSICART PROJECT. Featuring members of NECRODEATH and MASTERCASTLE performing the hystorical Pink Floyd’s album “The dark side of the moon” in a heavy way…

MUSICART Project born in 2011, october, by an idea of Peso (Necrodeath’s drummer)  with Pier Gonella (Necrodeath and Mastercastle guitarist), which have to play a revisited, personal and heavy version of the hystorical Pink Floyd’s album «The dark side of the moon». Both musicians are very closed to this album, so they started to rehearsing and re-arranging some parts of it. First tracks which came out from rehearsal room were «Us and them» and «Time». Then these tracks were performed on vocal parts by Giorgia Gueglio (Mastercastle’s vocalist) and Zanna (ex-Sadist, Raza de Odio’s vocalist). Also Mastercastle and Athlantis bass player Steve Vawamas was involved in this project, and Andrea Vulpani completed the line up on hammond. 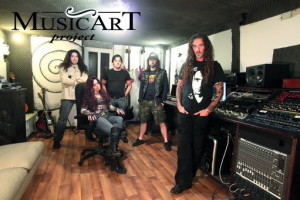 The whole project has been completely arranged and recorded at Musicart music school and studio recordings, in Rapallo, Genova, Italy. Founded by Pier Gonella in 2011.

All musicians involved in MUSICART Project, are music teachers inside the school.

This recording, revisited in a more heavy way is called «The black side of the moon». Enjoy it!

This site uses Akismet to reduce spam. Learn how your comment data is processed.